“Haiti was not on my radar screen,” said Dr. Jeffrey Link, D.D.S., who recently was part of a group of 25 medical personnel to make a trip to the earthquake ravaged island nation.

Link, 50, who recently opened an office at Three Lakes Dental in Prudenville, traveled to Haiti on Jan. 26, as part of a group of 25 doctors, nurses and support staff sent by Haiti Needs You.com, a non-profit medical relief program. The mission was sponsored by Holy Spirit Catholic Church in Grand Rapids. He said that he was inspired to join the team after seeing coverage of the disaster on Jan. 18, involving children who had been orphaned by the massive earthquake of Jan. 12 and its aftershocks.

Link’s special affinity for issues relating to orphans comes from a mission he and his wife Kristy helped found and are actively working with in Nicaragua, which includes an orphanage and nutrition center.

The Haiti Needs You team flew to Port au Prince, Haiti on a corporate jet provided by Amway Corporation and immediately began work with victims of the earthquake. An oral surgeon, Link helped set up an operating room at Grace Children’s Hospital where he performed surgery on many patients suffering from facial trauma.

He also went to other locations where he set up a makeshift operatory to conduct extraction clinics, helping ease the pain of Haitians whose problems were not necessarily caused by the earthquake, but who were in dire need of dental care.

Link said he was amazed by the spirit and resilience of the Haitian people he encountered. With most having lost family members and friends in addition to suffering the loss of everything they owned and enduring their own physical and emotional injuries, “they still had this sense of ‘we’re in this together’ and we’re going to do what we can to help each other because this is our country,” Link said. 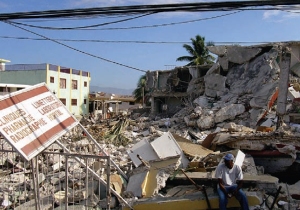 He said that in the face of complete destruction of their homes and lives, he would hear songs of praise being sung every night. “You know they were hurting,” said Link, “but they still did it.”

Link said the 10 days he spent working in Haiti were very emotionally and physically exhausting, but that the experience turned out to be one of the most inspiring he has ever had.

Haiti Needs You Director Tim Ryan said the group has put together another team which will work in Haiti March 21-30, and is looking for donations and personnel with medical expertise for future missions. He said his organization is also looking for other organizations to partner with in a “major tent and tarp drive,” to gather tents and tarps for shelter before the rainy season hits Haiti in April. He said there are currently many thousands living under nothing more than bed sheets.

To help out, go to www. haitineedsyou.com online,